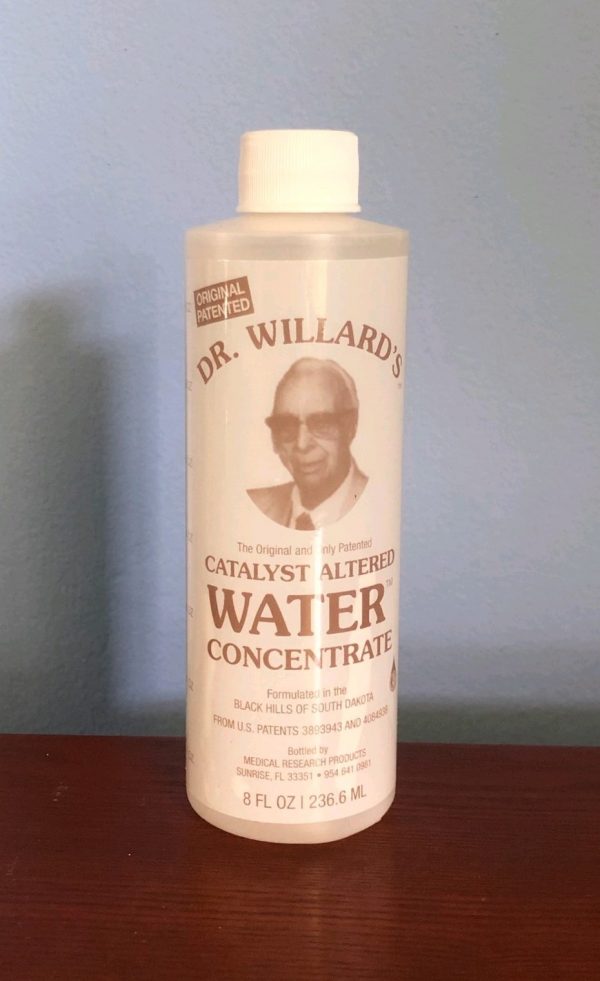 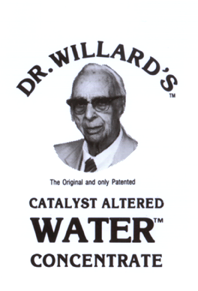 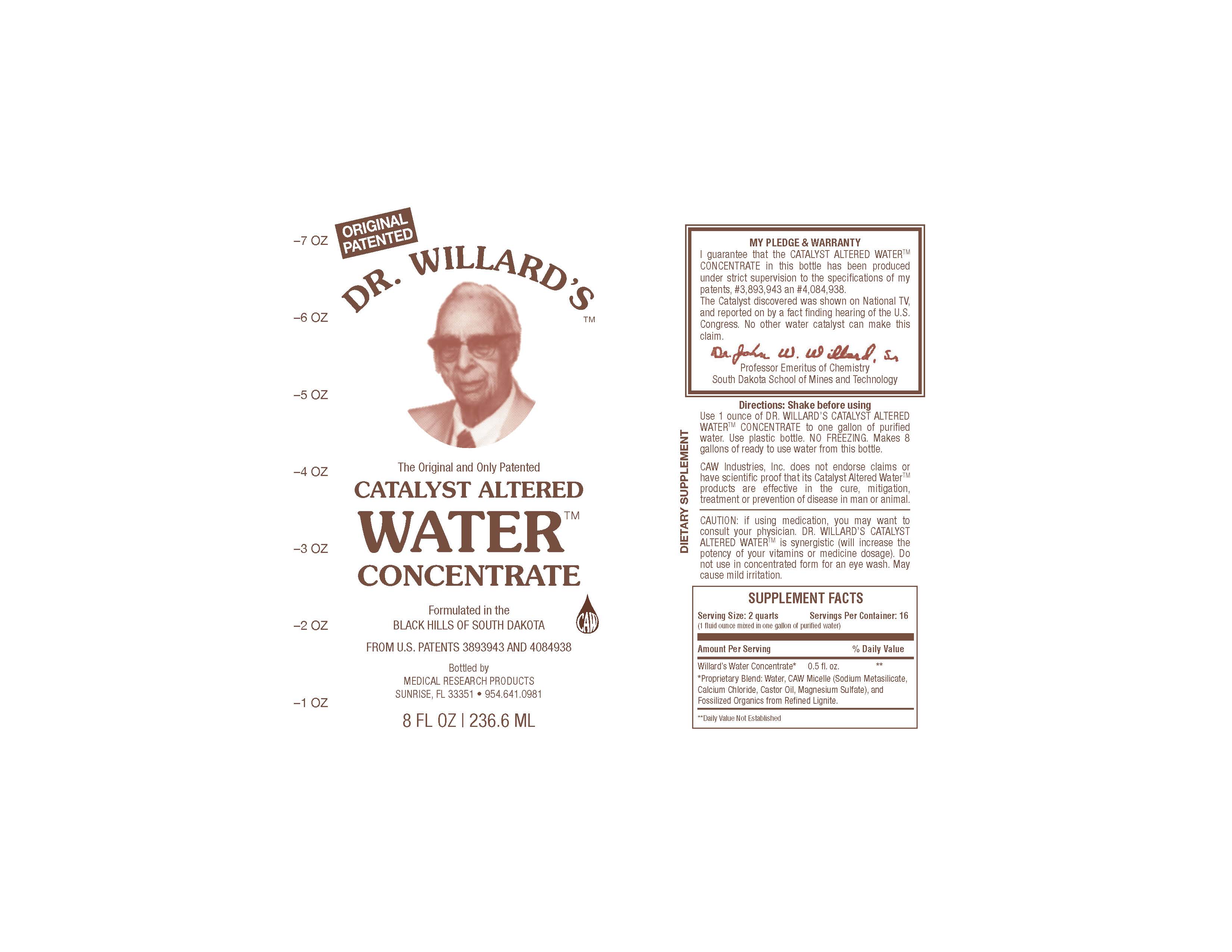 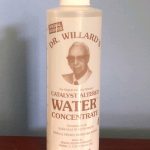 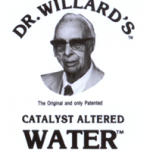 A normalizer of all living things, Willard’s Water reduces stress on the entire system and promotes more rapid healing. It increases life span of cells, nutrient assimilation, circulation, and permeation of water into all cells of the body including hard to reach areas such as the lymph system. It eliminates waste materials from cells, and promotes production of collagen and elastin. In the early 1960s, Dr. Willard was experimenting with water, adding various minerals and trace minerals to it to increase its solvent capabilities. Then one day a serendipitous event occurred. During his research, Doc received a severe burn on his hand. To ease the pain, he immersed his hand in the only volume of water that was available: a dilute solution of his Catalyst Altered Water. To his surprise, the pain stopped, and no blistering of the hand occurred. This began the long research into the properties of his Water. Dr. Willard had been ‘gassed’ in the war and suffered from extreme dosages of radiation while carrying on investigations for the armed services (he worked on the Manhattan project) and suffered from very poor health. In fact, his health was so severely affected he reached the point where he could barely carry on his scientific work. Soon the good doctor used his own water. The water left him feeling much better and able to work again. The word spread. Thousands of people used it on themselves and on their farm animals. Note: Willards Water can also be used to help plants and crops grow bigger, better, and faster.

Dr. Willard said that catalyst altered water acts as a normalizer on all living things and promotes more rapid healing. Any living thing that is under stress is in an abnormal state. If there is stress in the bloodstream, the blood cannot properly carry oxygen or carry out most of its vital functions (Dr. Willard reports that CAW increases blood circulation). “Every living thing has a built-in defense mechanism to help it survives stress. Catalyst Altered Water seems to have the property of revitalizing and stimulating the effectiveness of this natural defense system on all living things.”

CAW is essentially a dilute water solution containing certain electrolytes that gives it amazing properties. It is simply water that has had its molecular structure altered or organized. This altered structure seems to make the water “wetter” and better able to work with tremendous efficiency. It helps to decrease the surface tension of water which allows a greater permeability into every cell of the body and hard to reach areas such as the lymph system. Since the body is composed of 70% water, this enhanced characteristic of CAW greatly improves the natural functioning of the entire organism. Chemical reactions responsible for life processes cannot take place without water. By making water more reactive, the reactions taking place in living tissue are facilitated. If these reactions take place more easily and efficiently the quality of life improves.

Another possible explanation for the effectiveness of catalyst altered water lies in the study of the cell. Using a device called the FONAR to study the structure of the molecules in living cells, scientists have discovered that the water inside the cell differs from ordinary liquid water. It appears to exist in a semi-crystalline structure, less solid than ice but more solid than liquid water. Dr. Willard believed that his concentrate gives ordinary water a similar structure, with similar biological characteristics as those in living cells.

One of the normal functions of cells is the production of protein. Proteins plays a vital role in cell metabolism. The cell itself produces the protein by using other proteins, namely DNA and RNA. When cells were cultured in a CAW based tissue fluid, they produced significantly more proteins than control cells which were cultured in ordinary water.

There are 2 proteins that have a vital part in maintaining the structural integrity of the body. They are collagen and elastin. CAW has a profound effect upon production of these 2 important proteins. For this reason, Willard’s Water can also yield a cosmetic effect – helping to firm the skin by building tissue from beneath and giving it more elasticity as well.

Scientific labs found Willard’s Water to be non-toxic, non-corrosive, non-carcinogenic and with no harmful effects. Other Benefits
Tissue culture tests found that CAW increases the life span of cells. It was tested against ordinary water as a control. The cells which were treated with CAW were extended from 15 to 100 percent (depending on the cell tested) indicating up to a doubling of the life span of cells.Willard’s Water is a potentiator, i.e., it makes other medications and vitamins more potent. In many cases people can reduce their prescription medicines in half which can reduce side effects (only do this with the advice of your doctor).

The U.S. Bureau of Mines has found evidence of natural fungicides, bactericides and natural antibiotics and may have a synergistic effect when used with antibiotics and disinfectants.

In 1984, a Canadian poultry producer conducted an experiment by adding Willard’s Water to the drinking water in some of his chicken houses. It was found that the treated chickens ate less feed, gained more weight, had fewer mortalities, needed fewer antibiotics, were less ‘fretful’ than the untreated birds. Another poultry producer found that Willard’s water resulted in increased egg production, improved fertility, reduced chick mortality and faster growth.

A kennel at the Black Hills Greyhound Racetrack was struck by a virus. The dogs began receiving Willard’s water and not only did they appear to be freed of the virus, but they’ve immediately began winning more and more races than they ever had in the past. Three weeks later the kennel jumped from 8th place in the standings to 3rd as the victories kept mounting. They took the dogs off Willard’s water and they stopped winning races. After putting them back on the water they started winning once again.

The same kennel also found that CAW reduced aggressive behavior in the animals. Two of the dogs that were always fighting started behaving themselves and when taking them off CAW, their aggressive behavior returned. Dr. Willard reported that this is because Willard’s Water helps to reduce stress on the system.

There is only one patented copyrighted catalyst altered water – Dr. Willard’s. We are licensed to carry the authentic original product with Dr. Willard’s picture on it.

Add one ounce to one gallon of water. Drink at least one quart per day, preferably 1⁄2 gallon or more.

Dietary Supplement Use Only! This product is not intended to treat, cure, mitigate or prevent any disease. These statements have not been evaluated by the Food and Drug Administration.

There are no reviews yet.

Wow look at this!

This is an optional, highly
customizable off canvas area.